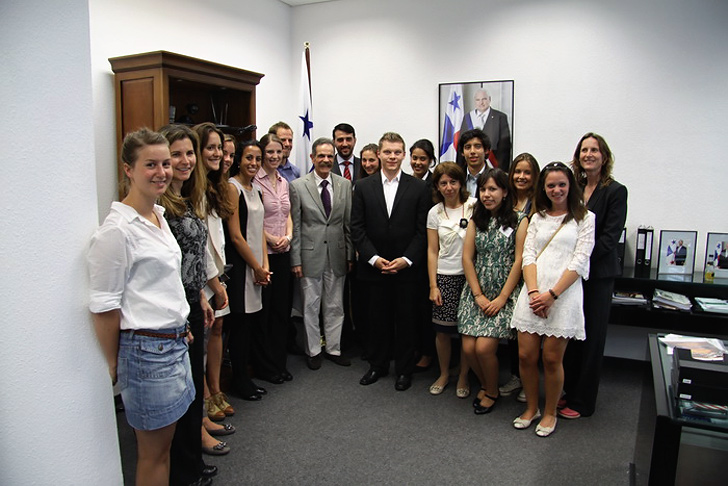 The ICD was delighted to welcome a diverse group of young leaders from three different continents to Berlin to discuss ways of deepening cultural relations between Europe and Latin America.

As an introductory lecture for the “Europe meets Latin America” conference, the Secretary General of the European Cultural Parliament, Karl-Erik Norrman, gave a general presentation about Cultural Diplomacy, talking about its growth from a historical perspective. He referred to the ICD as a meeting place for comparing cultural experiences between governments, civil society, the arts and media. The participants had also the opportunity to visit the German Parliament and to attend a lecture about its historical background. Ambassador Norrman made references to the establishment of the German Parliament, focusing on the influence that the events of the last 50 years have had on German domestic politics. In his lecture that followed, he compared the different nation-branding strategies used by Sweden and Latin America, stressing how important it was that the branding process should not embellish reality too much. The day’s proceedings concluded with a presentation by Amb. Dr. Juan Porras de la Guardia, Panaman Ambassador to Germany. According to the ambassador, relations between Latin America and Europe are mainly based on increasing trade, the opportunity to transfer technology, the facilitation of educational and cultural exchange and on making the world a more tolerant place.

Events on Wednesday began with an examination of what can be understood by “Europe” and “European.” Professor Ulrich Brückner, the Jean Monnet Professor of European Studies at Stanford University and a member of the ICD Board of Directors, was keen to impress upon participants that Europe should be considered as a cultural and a legal space beyond the regional state. Afterwards, the participants had the opportunity to visit the Academic Exchange Service’s (Deutscher Akademischer Austauschdienst) (DAAD) Berlin office, where they learned how the exchange service tries to increase the global mobility of students in order to facilitate interpersonal exchange. Director David Zimmermann presented the student exchanges organised by the DAAD in both Germany and Latin America as an example of cultural interaction between the two regions. This was followed by a trip to the Instituto Cervantes, where participants learned how the institute creates a platform for Spanish culture in Berlin. Seeing the visual art exhibition and the library gave the group the opportunity to come into contact with Spanish literature and films of various ages. Proceedings came to a close with an introduction to the ICD’s human rights initiatives made by Norma Wright, who directs these programs. The initiatives include the UN Genocide Convention, the Born Equal Initiative and the Workplace Initiative.

The day began with a performance by the artist Karina Villavicencio, who opened the session with a look into Cultural Diplomacy through visual arts. Her performance complemented a lecture by Marita Alvarez, head of Mamis en Movimiento (“Mums on the move”), on the integration of the Spanish-speaking community in Berlin and the promotion of dialogue between Spanish speakers and Germans. Following this, Alex Brugger, Senior Risk Manager at KfW reconstruction bank (Kreditanstalt für Wiederaufbau), gave a lecture titled “The Impact and Lessons Learned from the Financial Crisis for Europe and Latin America,“ focusing on the effects of the Euro crisis worldwide. Mr Brugger pointed out that in industrialised countries politics can matter more than economic data, and concluded that for both Europe and Latin America the next crisis is coming. Next, the participants atteneded a moderated interactive discussion with José Antonio Meier Espinosa, Ambassador of Peru to Germany, on the current role of cultural diplomacy and its historical development, and diplomatic and cultural relations between Latin America and Europe. Participants then returned to the ICD for a lecture from Marc Bogaerts, athlete and professional choreographer, on “Sports as Cultural Diplomacy,” discussing the Olympics as an avenue for cultural diplomacy. He pointed out that when individuals come together as athletes, competing for their individual countries, the cultural, social and political differences fall apart, giving space for healthy competition and the possibility to be equal, even if eventually somebody has to win. The day concluded with a lecture and discussion on “Honduras-German Relations and the Association Treaty Central America-Europe” from Efrain Diaz Arrivillaga, Ambassador of Honduras to Germany. The Ambassador stressed three important factors in Europe-Latin America relations: political dialogue, cooperation, and trade, emphasizing trade possibilities within the Eurozone.

The day began with a lecture from Pablo Palma, lawyer at Palma&Palma Abogados and advisor in Chilean law, on “Cultural and Working Differences, Chile and Germany: A Comparison,” discussing cultural and workplace differences in areas like the workplace, educational system, transport systems, dress codes, etc. The lecturer stressed that the importance of cultural diplomacy lies in the possibility of exchanging ideas and values; everybody is an ambassador of his/her own culture. Next, participants were given a tour of the Spanish Embassy, and a lecture from Political Secretary José Luis Garcia Galan on the growing importance of Latin America in the global arena, the financial and social situation in Spain from a diplomatic perspective, and cooperation between Spain and Latin America. He stated that Europe knows that Latin America is fast becoming an outstanding multinational actor and stressed that that Germany plays a key role by supporting the financial difficulties in the Eurozone.

“Latin America is very rich in terms of diversity, more so than other regions, and this is its main source of cultural power.”
“Finding a Latin American cultural identity is far from easy - we have to work more closely together as a region.”
“We are living in an age in which the region is trying to assert itself politically and economically.”
“Living in a multi-polar world, it is necessary to set up relationships that are win-win, so that all cultural actors benefit.”
“The European financial crisis will make Europe more likely to work together with Latin America.”
“It is important to see Latin America and Europe as complimenting each other rather than as competitors.”
- Amb. Efraín A. Diaz Arrivillaga-  Honduran Ambassador to Germany

“Each one of us is an ambassador of our own individual culture.”
“In my role as an international lawyer, I function as a kind of intercultural bridge between German and Chilean clients.”
“Regardless of whether there are the same opportunities in Europe and Latin America, the realization of the same dreams is still possible with economic aid and cooperation.”
“There should not be any problem for non-Germans to gain access to adequate employment in Germany.”
“As far as working environment is concerned, Germany expects that foreign workers fit into German rules and dynamics.”
“When establishing trade and exchanges at an international level, there are some standards that Germany and other countries have to meet. If they are working on an international level, both Germany and Chile will have to follow some international standards.”
-Mr. Pablo Palma Calderón- Chilean Lawyer

Full interviews can be found online in both written and video form.

“Latin Americans were not a tribe, but an empire.” - Amb. José Antonio Meier Espinosa

“Culture is one of the things that will allow us to live better. Culture is part of Diplomacy; I don’t see Diplomacy without Culture.” - Amb. Efraín A. Diaz Arrivillaga

“Overall a massive thank you to everyone involved. The interns are generally very professional, courteous and gracious. It’s been an absolute pleasure to be guided by them.” - Anonymous participants