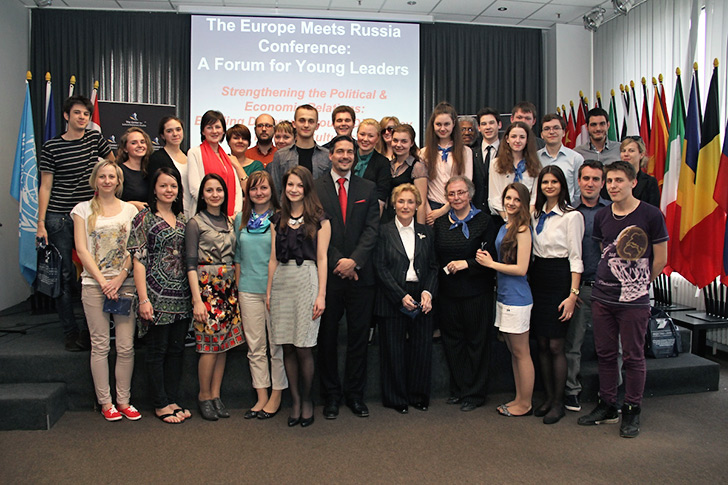 The Europe Meets Russia Conference: A Forum for Young Leaders (EMR) is a network of young professionals, and other individuals from across the world who have an interest in exploring and strengthening the European-Russian relationship. The EMR program has been developed in recognition of the importance of the relations between Russia, Europe, and the global political system. The EMR hopes to allow likeminded young individuals the opportunity to come together in order to share ideas and values, while at the same time educate upon, enhance and sustain European-Russian relations.

Strengthening the Political & Economic Relations: Building Dialogue through Diplomacy between Cultures", the EMR's most recent conference focused upon a development of Russian European relations. To that end a number of key politicians, academics and civil society members came to Berlin to discuss the issues. Among them was Prof.Dr.Ulrich Bruckner who gave a lecture upon "Cultural Diplomacy as a Bridge: History and the Future of EU-Russia Relations" also speaking was The Hon. Dr. Nazar Al Baharma, (Bahrain's former Minister of State for Foreign Affairs) who gave a lecture entitled "European - Russian Relations: A Tug of War or Sustainable Partnership?".

The ICD also offered a number of social events that took place alongside the main conference. The events gave the participants an opportunity to socialize in a more relaxed atmosphere while enjoying the cultural side of Berlin. One such event was a trip to Berlins famous East Side Gallery, the gallery which is due to be taken down soon is one of the most famous remnants of the Berlin wall, so the participants were lucky to get an opportunity to see it before it, like most of the Berlin Wall is demolished.