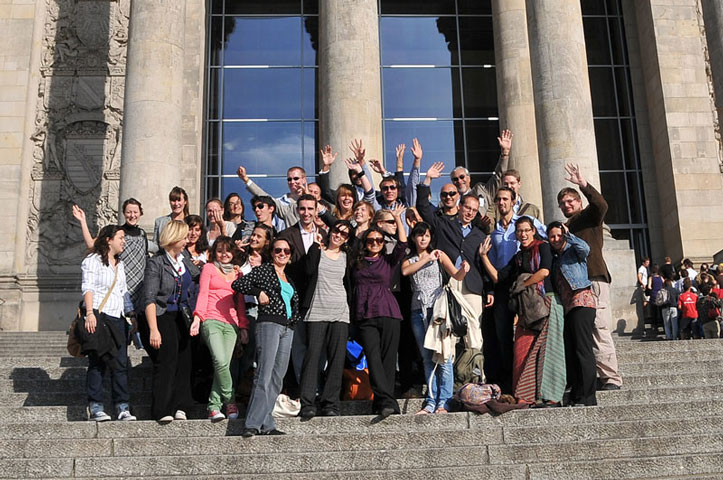 The second 'Europe Meets Latin America' Young Leaders Forum of 2009 began on Monday 14th September. The thirty participants were greeted by the EMLA team at the ICD House of Arts and Culture where they were each given a welcome pack containing important information regarding the week's activities. Once everyone had arrived there was a brief welcome session during which both the EMLA team and the Young Leaders had the chance to introduce themselves to the rest of the group with which they would be spending the rest of the week. This session was followed by a coffee break, giving everyone a chance to get to know each other on a more informal level.

After lunch, with full stomachs and more energy, participants headed to Berlin's beautiful Gendarmenmarkt, the starting point of the afternoon's walking tour of the city. In a few hours participants had the chance to see a number of Berlin's most famous landmarks including the Konzerthaus, Unter den Linden, the Brandenburg Gate, the Memorial to the Murdered Jews of Europe and Potsdamer Platz. The tour ended in the Ibero-Amerikanisches Institut, the largest specialist library in Europe dealing with Latin America, the Caribbean, Spain and Portugal, where the group had the chance to see a very interesting exhibition about the relationship between the DDR, BRD and Latin America during the times when Germany was politically divided.

On returning to the office participants were welcomed by Founder and Director of the ICD Mark Donfried, who gave a presentation on Cultural Diplomacy, explaining what it means and why it is important. After discussing a number of examples of cultural diplomacy Mr. Donfried also introduced the concept of Leadership Initiatives, stressing the fact that the most important outcome of the week would be that the participants network and cooperate on a project designed to promote sustainable inter-cultural dialogue.

As the tradition of Young Leader's Forums at the ICD dictates the first evening of the forum ended with dinner in 'En Passant' where the group was served delicious food, wine flowed and spirits were high.

Tuesday's activities began at the Instituto Cervantes, where participants were taken to see an exhibition entitled 'Inka Gercilaso: Royal Commentaries on the Inca'. Since the exhibition was a collaborative project between the Instituto Cervantes and the Peruvian Embassy, a representative from the Embassy came to give a brief introduction to the panels and was available to answer any questions the participants had. The exhibition provided an interesting and perhaps controversial example of cultural diplomacy and sparked much debate on issues such access, race in Latin America and cultural elitism, which the participants had the opportunity to discuss later in the day.

After lunch, which the EMLA team and some participants ate at an American-style diner in Hackescher Markt, the group made their way to the German Foreign Office where the afternoon's lectures would commence. During a short presentation guest speaker Wolfgang Hoelscher-Obermeier gave an introduction on the role of the Foreign Office and of a Diplomat. This was followed by a question and answer session during which participants discussed general topics as well as issues related to the European-Latin American relationship.

The afternoon continued in the ICD House of Arts and Culture where Mark Donfried led a discussion, during which the Young Leaders had a chance to reflect on the examples of Cultural Diplomacy they had seen so far during the program and analyse their strengths and weaknesses. The group discussion was followed by a talk by Feline Freier of the International Organisation for Migration. Ms. Freier stressed the complicated nature of migration and related issues, discussing the potential positive and negative effects on both the countries of origin and the host countries. Issues that were dealt with in the subsequent debate included remittances, the 'brain-drain' effect, racial prejudice, multiculturalism and globalisation.

Day three began at the ICD office with a presentation by Stefanie Jung from the Development Bank (KfW). Ms. Jung, who has spoken at other Young Leader's Forums including 'Cultural Diplomacy in Africa', gave a detailed explanation of the role of the bank, citing specific examples of development projects in Latin America, such as the provision of safe drinking water in rural Guatemala, and the positive economic repercussions such projects can have on a region.

Following a delicious lunch at Italian restaurant 'Vapiano', the group made their way to the 'Bundeszentrale für Politische Bildung' (Federal Agency for Civic Education). The first speaker of the afternoon was Dr. Ulrich Brückner, Professor of European Studies at Stanford University and member of the ICD's Advisory Board, who talked about Europe, its history, its future and its fluidity as a cultural concept. In the subsequent discussion participants talked about the extent to which a European identity exists as well as considering the results of further European expansion.

After a quick browse in the bookshop at the BPB, the group returned to the ICD's House of Arts and Culture for a well-deserved coffee break. The second speaker of the afternoon was Gabriela Trentin from Mundo Español, a company that organises volunteering and internship programs and Spanish courses in Argentina. Ms. Trentin talked about the programs offered by the company, what they involve, and the potential benefits for those who take part in them. Her presentation sparked a very lively debate during which participants discussed national stereotypes and elitism and considered the extent to which such programs could be considered as a useful form of cultural diplomacy.

The third day of the forum ended in well-known Latin Club 'Havanna' in Schöneberg. After a group salsa lesson the forum participants and the EMLA team spent the night perfecting their newly acquired dancing skills. The mojitos were delicious and the party went on until the early hours of the morning!

The slightly later start on Thursday was much appreciated by all of the previous night's most enthusiastic salceros! After a much-needed morning coffee at the ICD office participants welcomed the day's first speaker Mariana McGill, the Panamanian Director of Ecotourism Company 'Latin America World'. During her presentation Ms. McGill discussed the cultural as well as the environmental element of her Ecotourism packages and stressed that it was her aim to provide her clients with access to real cultural experience and exchange. In the subsequent debate participants raised the subject of race in Latin America and discussed the positive and negative effects resulting from the increasing association between indigenous peoples and the ecotourism experience.

The afternoon began in the Bundestag. The group were fortunate enough to be given a brief tour of the building by Ulrich Finkenbusch who works for Florian Toncar of the FDP in the Department for Human Rights and Humanitarian Aid. Mr. Finkenbusch gave a talk on German identity and its changing face over the course of the last two centuries. This presentation sparked a much wider debate on identity, diversity, immigration, prejudice and the German Antidiscrimination act after which the group made their way to the roof of the building. Participants took advantage of the glorious September afternoon to take photos in front of Sir Norman Foster's glass dome and the beautiful panorama of the German capital.

Next on the day's agenda was a talk on art as cultural diplomacy given by Dr. Matthias S. Tantow, the Founder and Director of Galerie Tantow which is the only gallery in Germany to deal exclusively to Latin American art. Dr. Tantow talked about the gallery's current exhibition of Venezuelan prints and stressed the importance of promoting Latin American art to Europe where it is little known and little appreciated. The young leaders were also lucky enough to have the opportunity to meet and talk to Rubén Gallardo from Mexico and Diego Gortero from Ecuador - two Latin American artists who have exhibited in Galerie Tantow and who are now living in Berlin.

Thursday's official program was brought to a close with a discussion lead by Mark Donfried, during which the participants were able to reflect on some of the major themes raised during the week. The group were then taken to Greek restaurant 'Ach! Nicho Ach!' for some very well-deserved relaxation time. The food was hearty and the spirits were high and, once again, the night ended with dancing in the aisles!

The fifth and final day of the EMLA forum began with a workshop on intercultural communication led by Ms. Martina Maletzky who encouraged participants to appreciate the importance of taking different cultural tendencies into consideration in a business context. This was followed by a talk by special guest to the EMLA forum Mr. Karl-Erik Norrman who is Secretary General of the European Cultural Parliament. Mr. Norrman highlighted the importance of the role played by cultural diplomats and explained that the European Cultural Parliament was founded as a response to the feeling that cultural creators (artists, writers, musicians etc.) are often engaged with political and international affairs and needed an official space in which to discuss them.In the afternoon the participants went to the Panamanian Embassy where Dr. Lourdes Vallarino gave an enthusiastic and lively presentation of Panamanian life and culture. The Embassy was particularly hospitable, with staff having prepared traditional food for the young leaders to enjoy after the lecture. Re-fuelled and reenergized, the group headed back to the House of Arts and Culture where each Working Group was to present the Leadership Initiative which they had been discussing during the course of the week. Mark Donfried gave feedback on each presentation and the group also had the opportunity to discuss proposals, suggest ideas and offer support where it might be needed.The official end of the EMLA forum was marked by an informal graduation ceremony, during which each Young Leader was presented with an official certificate from the ICD to certify their participation on the Forum. After the ceremony, some coffee and delicious cake participants took their seats in preparation for a musical lecture by renowned musician Reggie Moore on his role as a 'Jazz Ambassador' for the United States.

In an engaging and entertaining presentation Mr. Moore played some beautiful jazz, including a spontaneous original piece that he improvised around five notes given to him by the EMLA participants. The lecture was moving, thought provoking and very well received - a perfect end to a busy and intellectually engaging week.