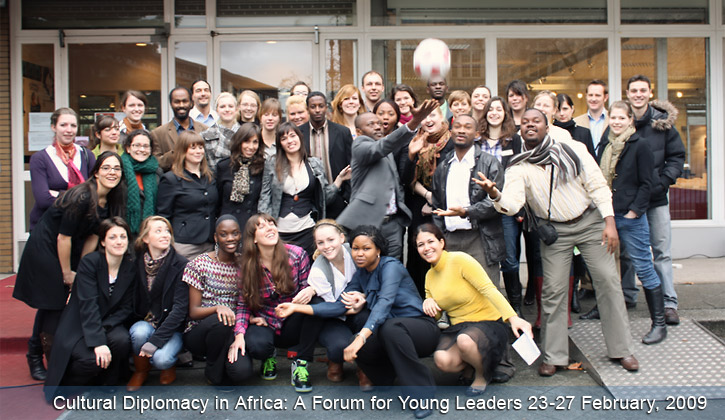 Report of Day 1: An Introduction to Cultural Diplomacy

The second Weeklong Seminar for Cultural Diplomacy in Africa: A Forum for Young Leaders started with a welcome by Program Director Georgina Salanki. Each of the 42 Young Leaders was then given a chance to introduce themselves. The participants came from all over the world including Iceland, the Netherlands, the UK, Germany, Australia, Congo, Sweden, Nigeria Burundi and Cameroon. They also came from various academic backgrounds ranging from international studies, business, European studies, medicine, to African and African-American Studies.

The introductions were followed by a seminar about the meaning and the history of cultural diplomacy ICD Director and Founder Mark Donfried. Mr. Donfried started the seminar with a definition of cultural diplomacy as the exchange of ideas, information, art and other aspects of culture among nations and their people to foster mutual understanding.

The afternoon began with a lecture by Dr. Lacina Yeo from the Freie Universität. Dr. Yeo discussed two men that had a great impact on German and African cultural diplomacy. Participants learned about the Senegalese poet and politician Leopold Sedar Senghor, the German writer and translator Janheinz Jahn, and the effect they had as cultural intermediaries between Africa and German speaking countries.

Afterwards, participants were divided into groups to discuss various topics relating corporate social responsibility in Africa. Groups discussed how large companies such as Coca-Cola can help in the struggle against diseases such as AIDS/HIV, water shortages, and the environment, and how these companies deal with advertising about and in Africa.

In the evening the participants were invited to attend a Black History Month event hosted by the ICD. The event included a film screening that focused on the African Diaspora in Germany and the issues faced by this group.

Report of Day 2 – Challenges and Opportunities for Cultural Diplomats

After the performance by Mr. Birkholz the group met with Larissa Israel, Project Director of the education department in the Berlin Philharmonic. Ms. Israel explained how the British conductor Sir Simon Rattle had revolutionized their approach to community work since arriving, following the example of British orchestras that already had established education programs. She then provided examples of the work that the musicians did in the local community, from prisons to schools, and highlighted how the writing, practicing, and performing of music brought people together. The commitment of the Philharmonic to work in the community was impressive and thought provoking, and as influential and moving as the performance itself.

The participants then headed back to the Amerika Haus for a lecture given by John Eichler (a Berlin-based lawyer and intercultural strategist). Mr. Eichler discussed his personal journey growing up as an Afro-German and the issues that Africans face when they emigrate from the African continent, as his father did in 1958.

The evening ended with a group dinner in the Passant restaurant, allowing the participants to reflect on the Seminar in a more relaxed setting.

On Thursday morning the participants met at the KfW development bank for a seminar on development aid and financial cooperation with Africa within the water sector. Stefanie Jung, project coordinator for KfW bank, discussed the functions of KfW in developing programmes around the word on behalf of the German Government. The specific topic for the day was water management and strategies in helping the 1.1 billion people that are without access to drinking water. KfW’s main task is to fund projects in cooperation with the BMZ (Federal Ministry for Economic Cooperation and Development) that build water plants, and educate citizens about water, and sanitation to ensure a sustainable system. The participants then divided into groups to discuss the efficient means to solve the world water crises, and how to reach a sustainable water supply and keep access for everybody.

Report of Day 5 – The Bundestag

The final day of the Weeklong Seminar started with a lecture in the German Parliament (Deutscher Bundestag). Participants learned about the current political climate in Germany, in particular the problems facing the grand coalition as they prepare for the elections this year. The presentation included a detailed description of the day-to-day operation of the Bundestag, which gave the participants an insight in to what exactly takes place within the Bundestag

In the afternoon Jeffrey van Staden joined the participants to discuss tourism and what this means for cultural diplomacy in Africa and Europe. Mr. van Staden, founder of Elangeni African adventures, discussed tourism in a general sense and how touring, and travelling in Africa can improve people’s images of the continent. He also discussed Elangeni’s advertising, and how he encourages tourist to experience the “real Africa.”

To end the Weeklong Seminar, ICD director and founder Mark Donfried encouraged the members of CDA to promote cultural diplomacy within Africa and with the rest of the world. He explained that the ICD hoped the participants would develop short-term leadership initiatives that could help to reach these goals. Several ideas were proposed for future cultural diplomacy initiatives including local initiatives, using catholic schools, youth clubs, and local universities as networks. Several participants suggested specific programs such as bringing together women through a fashion show, starting mentoring programmes for young African boys, and starting a symposium to educate people about various African countries and cultures.