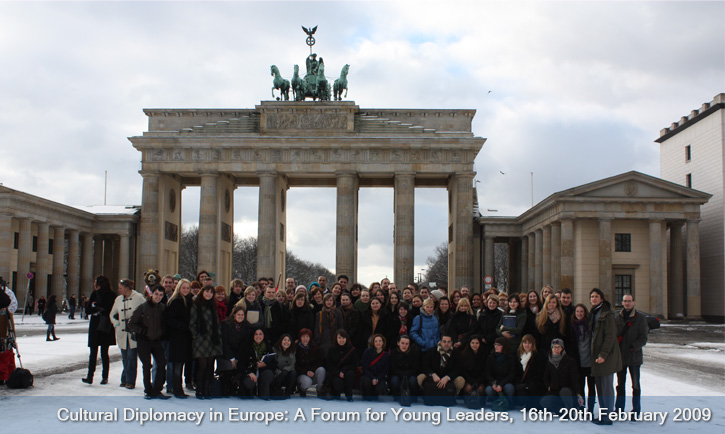 The opening day of Cultural Diplomacy in Europe began with ICD Director and Founder Mark Donfried introducing the participants to cultural diplomacy. The participants considered definitions of culture and diplomacy and looked at quotes from such academics as Cynthia Schneider and Samuel Huntington. The participants were informed on the need for cultural diplomacy and also its role in the international system both in the past and present. This introduction also detailed the need for dialogue between cultures and gave an insight in to the institutions, such as the Alliance Francais dating back to 1883, which have pushed for the support of cultural expression.

In the second morning session the group received a presentation from Anja Fabiani a member of the Slovenian Ministry for Foreign Affairs. Ms. Fabiani discussed with the students the cultural policies during Slovenia’s presidency of the European Union in 2008. The participants were offered an insight into the policies and aims of this leadership during what was named the ‘Year of Intercultural Dialogue’. In light of the title of the year they focused their plans on promoting cultural relations and external policy, and in addition to this, organised conferences specifically to raise the topic of intercultural dialogue and maintain culture as a priority.
Ms. Fabiani also discussed her own personal work as a part of this ministry, which includes being involved in policy making and research and analysis of a number of EU leaders, including, Brown, Sarkozy, and Rasmussen. Her more detailed work included researching how the Spanish Civil War influenced the decisions and policies of Zapatero.
Following the lunch break the participants were given a hugely insightful presentation by Willem Noë – a representative of the European Commission. Noë began by showing a timeline of the enlargement of the EU beginning with the 6 founding states up to the present day with the 17 current member states. He then informed the group on exactly what the EU is and does, why states want to join and what are the costs and benefits to member states. The group were keen to raise points about defining Europe and its borders and the possibility of a Turkish accession into the EU.

The young leaders spent most of the second day of CDE in the European House, the representation of the European Union in Berlin, located near to the Brandenburg Gate. The morning started with a lecture on Europe and the European Union by EU Jean Monnet Professor Dr. Ulrich Brückner (University of Stanford), who lectures in the field of European integration and European Affairs.  Professor Brückner gave significant insights into the general framework of the European Union by focusing on how policy-making functions in a multi level structure such as the EU. In this context he mentioned the problem of democratic legitimacy as well as questions of an organizational and bureaucratic nature concerning national competences being transferred to the EU. The young leaders then had the opportunity to raise questions such as “Is there a strategic attempt to create a European Identity?”, which were answered in detail by Professor Brückner. He pointed out that the EU has no straightforward agenda aiming at creating a European Identity but that, on the contrary, it aspired to the maintenance of diversity. Nevertheless, he highlighted, making use of the advantages of an integrated Europe with its single market created opportunities that European citizens did not have before, which might obviously have an impact on identity matters.

After a short lunch break on Unter den Linden the participants were welcomed back in the European House by Mark Donfried, who talked about the difference between advertising, propaganda, and cultural diplomacy, and the agents, vehicles, and audience attributed to it. By way of example, commercials were shown and the participants had the chance to analyze them with regard to the theoretical framework of propaganda, advertising and cultural diplomacy.

To go further into the importance of cultural diplomacy in a European context, the participants took part in a role-play on the EU-decision making process. A European Parliament policy meeting was staged whereby the students were divided into five groups, each of which represented the views of France, Italy, the UK, Spain and Latvia. Their task was to decide whether or not the EU should establish a bureau for European Cultural Diplomacy. Participants were given guidelines as to the likely position of their country, and then asked to come up with a recommendation for parliament policy. The discussion provided an insight into both the positive and negative aspects of such an institution. The afternoon in the European House ended with a workshop on European immigration and asylum policy.

In the evening, the participants had the chance to attend a Black History Month in Berlin event that was organized by the Institute for Cultural Diplomacy to raise awareness of and celebrate the influence of the African Diaspora in Germany.

The morning and afternoon session gave the participants the chance to visit both the Collegium Hungaricum or Polnische Institut and Czech Embassy, all good sources for examples of how individual states are promoting their culture abroad.

At the Czech Embassy the group discussed some of the Czech Republic’s current policies in regards to foreign relations, namely links with the Baltic states, and indeed about their role in the EU as president country this year. The Embassy reiterated the country’s three main priorities – Economy, Energy and the E.U. in the world and discussed its focus within the Czech republic on maintaining a stable economy and ensuring safety of public finances.
The Collegium Hungaricum serves to inform about Hungary as a country and its culture. The institute, which was founded in the 1930s, offers art exhibitions, lectures and film showings taking place across Germany. In addition to this, it is possible to enrol in Hungarian language classes. The students discussed Hungary’s accession to the EU, what it meant and how have they contributed to Europe. The participants also considered how the Collegium Hungaricum promotes its nation’s culture without simply playing to stereotypes that already exist and its governance and financing through a bilateral agreement between Hungary and Germany.
At the Polnische Institut the participants spoke with Public Relations officer Marcin Zastrożny who discussed its aims and projects. As a relatively young country and with an ever-growing culture the institute, through exhibitions, concerts and film screenings, demonstrates Poland as a country to Berlin. Following his introduction the students had the opportunity to pose questions. Many wanted to discuss the issue of language and the institute’s focus on using only the language of the country they are in.
The final session of the day was certainly a highlight of the week where the participants had the unique opportunity to meet with the first generation of Kosovan diplomats in training. The young diplomats, being guided by Dr. Ullrich Brückner, were eager to discuss with the group their roles and what they are most excited about doing with their work. The young leaders split into groups and discussed with the guests the need for cultural diplomacy and, furthermore, many issues regarding Kosovo.
The topics considered in this last session were very wide and provided a lot of opportunity for further discussion. Many were keen to raise such issues as contemporary problems in Kosovo, relationships with Serbia, Russia and the E.U., and how they hope to project their culture following a year of independence.

For the morning session of Thursday the participants divided into groups to discuss various topics regarding the E.U. One of these groups focused primarily on the possibility of a Turkish accession in to the E.U. What would this mean and, indeed, would it be possible? Economically it is well integrated in to the market so it is a good candidate for accession, however, it could be argued that due to such issues with Kurds and freedom of press Turkey may not be ready just yet. Regardless, it was agreed that in the future if Turkey has met all the criteria then they should not be rejected. Other issues discussed by the groups were, the Lisbon Treaty, a Ukrainian accession to the E.U., and E.U. regulations and laws.

Following a lunch break the forum participants were greeted at the Neukölln Kulturamt. The building, which includes a restaurant and theatre, is the centre for culture in the diverse district in Berlin. The young leaders were given a brief outline of the history of the district, which today has over 160 different ethnicities residing in it. With its history as a working area with many of the houses built to accommodate factory employees, the cheap rental prices have attracted many artists, cultures and become renowned for its tolerance of diversity.
In the second part of the session at the Kulturamt the young leaders were given an insight in to one of Neukölln’s most successful projects. 48 Stunden Neukölln (48 Hours Neukölln) is a cultural festival, which takes place over two days in 165 venues across the district. The event aims to bring all the cultures within the community together and provide a platform for the arts and educating about diversity.
For the final session Karl Erik Normann, the Secretary General for the European Cultural Parliament gave a very informative talk on European Identity. Mr. Normann spoke about the issue of feeling European, is there such a thing as a European Identity and if so how do we feel such a thing? One thing that is unique to all of Europe is the common experience of the World Wars and as a collective it is vital to maintain the building of values in order to create a common identity. The talk sparked much discussion between the participants. Many raised such issues as, what should be included in E.U. policy, constructing an E.U. identity without discluding any religions or cultures and finally, just how possible is it to create a common European identity?

On Friday the Young Leaders came together for the final time.  The morning session provided the opportunity to consider cultural diplomacy from the perspective of sports. The participants were given a presentation from Sarah Bagel of Street Football World. Through football the organisation fosters dialogue and development in 70 local projects worldwide together with its wide range of global partners. The Young Leaders were keen to ask questions and find out more regarding mixed teams and most notably the projects running in Israel/Palestine and the sustainability of such a project.

This last session gave the participants the chance to once again come together in groups and discuss their ideas for possible future initiatives. The results from this session were certainly very promising and many interesting future projects were discussed. These ideas included one participant who offered the others to visit her small hometown in Westphalia where many of the residents are scarcely aware of a European context and rarely meet with other nationalities. Such a visit could include the Young Leaders talking with the local residents and discussing their background and culture with the aim of developing an understanding and awareness within the community.
Many of the groups developed ideas to create exchange programmes between their respective universities and the ICD. One participant from Chicago was keen to work on a possible programme between his university and another in Romania. Finally, a very interesting offer was proposed to the group to come to a University in Budapest and give a guest lecture on Public/Cultural Diplomacy, an idea which was warmly welcomed by the participants.
The forum came to a close with a leaving ceremony which saw the participants receive their certificates from Mark Donfried and the Cultural Diplomacy in Europe team before they left Amerika Haus to take back what they had learned from the week and put it into action in their home countries.