The opening day of this year’s Europe meets Latin America forum was a promising start for the fifty young leaders taking part in the programme that would follow for the rest of week. The day began with an introduction to cultural diplomacy by ICD Director and Founder Mark Donfried. He spoke about its role in international relations both in the past and present. In addition, he detailed the need for dialogue between cultures and gave an insight into institutions such as the Alliance Française dating back to 1883, which have a long history of supporting cultural exchange.

The afternoon session was split into two parts. In the first section the participants were divided into six groups and were given the task of discussing topics such as identity and culture, language, history, and integration. Following this, one member of each group presented their views and answers to the questions given on their handouts. In the break between sessions, the groups were given a short quiz with questions related to facts about either Europe or Latin America. This proved to be a popular part of the day, giving the participants the chance to show off their knowledge and bringing out the competitive spirit in some!

After the break, the young leaders were given handouts on issues relating to film and music. Once more the students gathered to discuss their opinions as a group with their fellow participants. A number of interesting points were raised, on the subject of Latin American artists who record in English, for example – should foreign artists feel compelled to sing in a language rather than their own? Is it necessary in order for them to be successful?

In the evening the participants were invited to attend one of the ICD’s Black History Month celebration events at the Amerika Haus, in which they were treated to a short film programme, West African food, and a concert by the energetic Buba Jammeh Quintett.

The second day of the Europe Meets Latin America forum began with an extensive discussion lead by Dr. Uli Brückner, a specialist in European Integration. Questions such as Is it possible to apply cultural diplomacy to Europe? were discussed alongside the obligations of institutions such as the European Union and the World Trade Organisation in this context. Dr. Brückner also raised the topic of the values that are central to the EU, the ideals of Europe, and equated cultural diplomacy to diversity.

In the afternoon session, Ambassador and founder of the European Cultural Parliament, Karl-Erik Norman, held a provocative lecture that began with the history of Europe from Greek mythology and Zeuss love for Europa, and concluded with the present day and the growth of European integration. Ambassador Normans discussion prompted many questions from the participants, who were so enthused with the presentation that the session overran and they had to continue debating in their own time

The young leaders then took part in an interactive workshop on Migration, the Caribbean and Democracy and Human Rights. Divided into two separate groups, the discussions ran simultaneously and provided a platform for exchanging ideas and opinions. Many of those taking part reflected on what migration meant to them on a personal level.

The final event of the day proved to be one of the highlights of the Europe Meets Latin America forum. Áine Morris, member of Slow Food, an organisation seeking to promote local food traditions and restore peoples interest in food, gave an impressive talk regarding food as cultural diplomacy. She spoke of the effects of large scale farming - using the example of soya beans - and the consequences this has for the farmers. Morris also spoke about her scholarship in the field and her goals with regard to her beliefs on the importance of food.

The evening ended with samples of food from all over the world, most of which was provided by the participants themselves. Afterwards, they enjoyed a meal together at Berlins En Passant restaurant in Savignyplatz, in the heart of West Berlin.

The young leaders were given Wednesday morning to explore Berlin for themselves, before re-convening in the afternoon to continue the program with a lecture from Mike Geddes, Media and Communications Director at Berlin-based streetfootballworld, an NGO that connects a network of various organizations using football as a tool for social development and cultural diplomacy. Mr. Geddes discussed the history of using sports to tackle various social issues, and the impact that football can have on communities around the world. Current projects include cooperation with the Peres Center for Peace, a group that encourages peace between Israeli and Palestinian boys and girls, and Espérance, a program in Rwanda that uses football to reconcile differences within the community and to raise awareness about issues like AIDS. Mr. Geddes spoke about how football motivates young people, teaches them about teamwork, punctuality and problem resolution, and gives them skills to use off the pitch. The participants then came up with theoretical sport programs that could be implemented to tackle real issues around the world, such as religious conflict, young people dropping out of school, and disabilities.

The afternoon ended with a workshop on art as cultural diplomacy. Participants were given quotes from different sources on the subject of art to prompt discussion about how it relates to politics, emotions and propaganda. They then looked at artworks by Banksy, Frida Kahlo, and Picasso, to name a few, and debated the extent to which the works may be viewed as political.

In the evening, the students were treated to a uniquely Berlin experience: drinks and conversation in the Eastern Comfort Boat on the Spree. The international crowd was in good spirits, and the lively Brazilian music was enjoyed by all.

EMLA Day 4: The Instituto Cervantes and the Colombian Embassy

The morning after the night before, the participants arrived at the Instituto Cervantess impressive building at Hackescher Markt, where they were shown the current exhibition in the Institutes gallery, a collection of works by photographer Óscar Fernández Orengo.

The Director of the Instituto Cervantes in Berlin, Gaspar Cano Peral, then spoke to the group about the Institutes function in promoting the Spanish language, and highlighted its intentions not only to represent Spain itself but all native Spanish-speaking countries. He then took questions from the participants who were enthusiastic in discussing topics such as funding and initiatives in Latin America. Before they left, the young leaders were shown around the library which is open to the public and holds over 4500 documents, books, films and music on Latin American and Spanish culture.

After lunch, ICD Director Mark Donfried gave a lecture on the subject of propaganda and advertising in cultural exchange and how countries portray themselves to others. The students considered how a country can share its culture and traditions effectively, and the differences between self-portrayal and the perception of others. The second section gave the participants the opportunity to engage with each other and take on the role of EU decision makers. A mock European Parliament policy meeting was staged whereby the students were divided into five groups, each of which was to represent the views of France, Italy, England, Spain and Latvia respectively with regard to the agenda: to decide whether or not the EC should establish a bureau for European Cultural Diplomacy. Participants were given guidelines as to the likely position of their country, and then asked to come up with a recommendation for parliament policy. The discussion provided an insight into both the positive and negative aspects of such an institution and the endless well of questions that surround the topic.
In the evening, the participants had the honour of being invited to a reception at the Colombian Ambassador to Germanys residence. The students were warmly received at the ambassadors home where they were served refreshments and were given the chance to ask questions and discuss their thoughts on the subject of cultural diplomacy with her.

To round off the night, the participants were invited to attend one of the ICDs Black History Month celebrations at the Amerika Haus at Zoologischer Garten. The evenings programme included a podium discussion entitled Cultural Perspectives of the African Diaspora in Germany, a Latin American Jazz concert, West-African cuisine and refreshments. 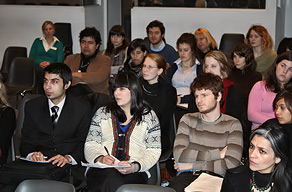 In the morning of the final day, participants went for a tour of the Ecuadorian Embassy and met with Alfred Pinto, the Ecuadorian Cultural Attaché. Mr. Pinto spoke of the various means by which art and culture may be used to promote Ecuador.

Participants were then given the opportunity to talk to ICD director Mark Donfried about what they learned during the week and what was expected for the future; through leadership initiatives such as those offered by the ICD, Mr. Donfried encouraged the EMLA young leaders to promote cultural diplomacy between nations. The ICD hopes that the participants will develop short-term leadership initiatives that can help reach these goals.  Further, the forum provides a means to create long-term connections between the participants and the ICD; previous independent projects include the publication of newsletters and the organization of bilateral conferences. Young leaders are given confidence to use the people they meet and the resources that they have available to them from the ICD and from past experiences, and to use the ICD online forum to share documents, ideas and literature with other participants.

Mark Donfried stated that the biggest challenge of cultural diplomacy is access to information, not race, class or sex. If we have the resources and the opportunity to communicate, it can be the key to understanding: “We must recognize a need somewhere and respond,” he said. “You are the ones who will determine what the future of cultural diplomacy will be, I certainly hope that it doesn’t end today.”