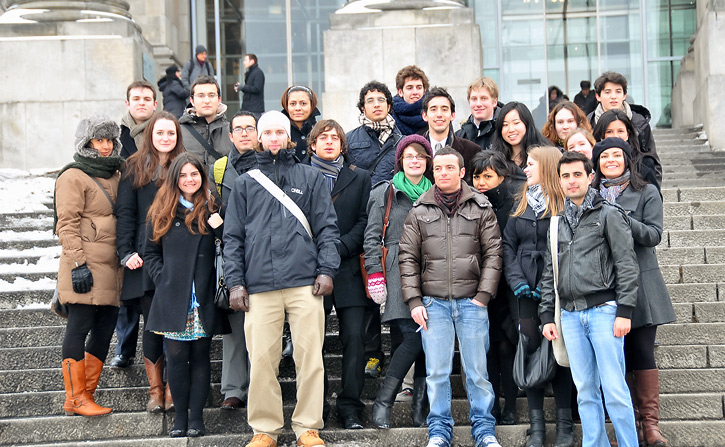 The conference for “Europe Meets Germany: a Forum for Young Leaders” took place in Berlin from the 14th to the 19th of February 2010. It brought together young leaders with an interest in exploring and strengthening relations between Europe and Latin America. The speakers included members of academia as well as figureheads from the Latin American diplomatic corps in Europe. The existing links between the two regions were explored as well as the implications of relations with increasing geo-strategic, economic, and political importance for both sides. Special focus was given the region’s economic integration and its strong countries in the international arena, as well as the importance and strength of the arts for Latin America to represent itself in the globalised world. Climate change and the democratic deficit in the continent were also central themes of the conference, as the lectures and discussions led to constructive debate among the speakers and participants, who mutually benefited from each other’s experiences and expertise.

Monday February 15th, 2010: After an introduction session by Mark Donfried, founder of the Institute for Cultural Diplomacy, and Peter Rees, Development Director of the ICD, the participants visited the Deutsche Welle, and in the evening attended the screening of “Besouro,” a Brazilian film by João Daniel Tikhomiroff, at the Zoo-Palast, the historic home of the Berlinale Film Festival.

Tuesday February 16th 2010: The participants spent the day exploring some of Berlin’s most important political landmarks, thus obtaining a true feel for the political landscape in modern Germany and Europe as they visited the European Commission and Bundestag. They also toured through the Museum of Prints and Drawings and explored the role of arts in European-Latin American relationships.

Wednesday February 17th 2010: The third day of the conference focused on Latin American historical perspectives and the issue of democratisation throughout the continent. Participants were also introduced to the concept of Nation Branding and the strategies Latin America can use to brand itself.

Friday February 19th 2010: The last day of the conference focused on economics, and the future of international trade for the region. Migration and remittances were also considered as an important and stable part of the economic development of the continent. Climate change was a also a central theme of the day, as well as the emergence of countries such as Brazil and Mexico as global economic players.