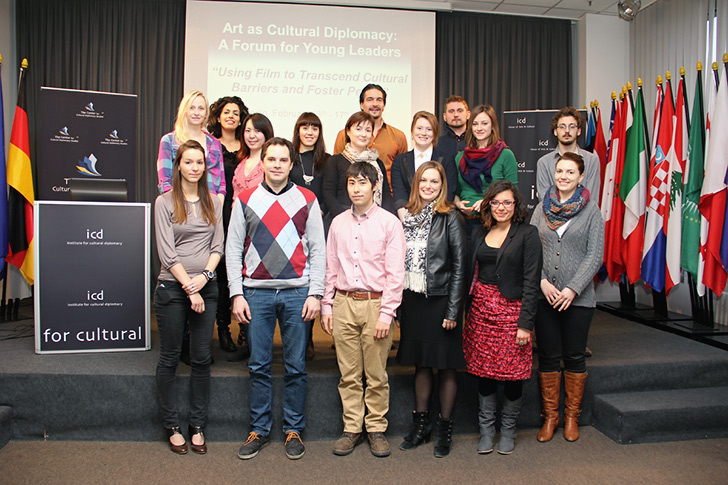 Art as Cultural Diplomacy: A Forum for Young Leaders (ACD) is a network of students and young professionals who share an interest in exploring the potential of art as a vehicle for Cultural Diplomacy.  Art and film has the ability to transcend borders as has been demonstrated numerous times by artists such as French activist JR whose "Women are Heroes" project involved the pasting of enormous posters across public spaces in countries such as Cambodia, India, Brazil and Sierra Leone and movies such as "Enter the Dragon" a Jackie Chan film released in 1973 and the first ever US-Hong-Kong film production
The title of the conference was "Using Film to Transcend Cultural Barriers and Foster Peace". One of the key topics was the use of art and film as one of the primary vehicles of Cultural Diplomacy, Prof.Dr.Ulrich Beckner and Amb.Karl-Eric Norman both gave key note lectures addressing this issue. Also present was the President of the ICD Academy Dr.Emil Constantinescu, who gave another of the keynote lectures, this time on the topic of  "Multicultural Society in Europe". The conference also attracted a number of leading NGO figures with the president of "Shoot4Change" Antonio Amendola giving a lecture and discussion on the topic of "Art as Cultural Diplomacy in Practice:  "Shoot4Change"

During the conference the ICD was able to host a number of social activities and events in the evening.  These low-key events gave all the participants a chance to relax and get to know one another in a more social atmosphere while exploring the multicultural city of Berlin. Included were visits to the well-known Greek restaurant "Ach Niko Ach", as well as two Berlinale, film screenings. The first of which was a film entitled ""Inch'Allah" which follows the story of a young doctor from Quebec, who crosses the border into the West Bank in order to treat pregnant women in a Palestinian refugee camp. While the second, "Burn it up Djassa" was a documentary showing the vibrant life of the Ivory Coast, a few months prior to renewed outbreak of Civil War.