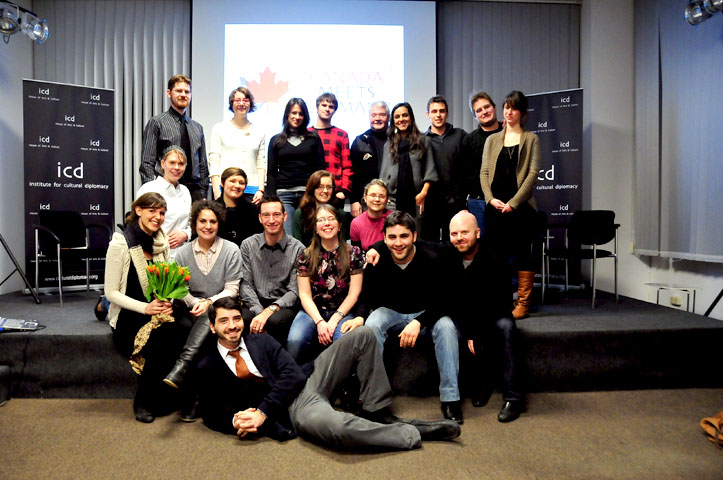 The six day conference for “Germany Meets Canada: A Forum For Young Leaders” took place in Berlin from the 7th to the 13th of March 210. The conference examined the following subjects: the bilateral relations between Canada and Germany, transatlantic partnerships, the difference in approaches to immigration policies, and co-operative efforts on climate change. In addition to these issues, the conference also looked at the unique relationship between the province of Quebec and Germany, German foreign policy towards Canada, and a comparison and contrast of strategies for attracting international students. Other leadership initiatives for young leaders were explored as the participants took part in several case studies and also worked on their own leadership projects in team building activities. Amongst the forum speakers for the six-day event were leading political figures in Canadian and German relations, media, academia, and cultural Attachés. Upon the conclusion of the conference, participants were given an official certificate of attendance, which provided details of the speakers who took part in the Canada Meets Germany Program, and the topics discussed.

Monday March 8th, 2010: The conference began at the Deutsche-Welle with a discussion on the role of sports as Cultural Diplomacy and the 2010 Winter Olympics. The participants were then given a tour of the Deutsche-Welle TV studios, and they later reconvened at the ICD House to hear a presentation from ICD Founder Mark Donfried on cultural diplomacy. The day concluded with an interesting presentation by Murray Small Legs who discussed aboriginal history in Canada.

Tuesday March 9th, 2010: The second day of the forum began at the Quebec Office. The participants looked at Quebec’s relationship with Germany, and Quebec’s image abroad. This was followed by a lecture given by Agnes Kolodziej who gave a comprehensive overview of the state of relations between both countries, covering the political, commercial, and cultural issues that both Canada and Germany communicate on regularly. The group then heard a presentation from Peter Rees who discussed leadership initiatives, where the participants then worked in groups to formulate their own ideas.

Wednesday March 10th, 2010: The third day started at the Bundeszentrale für Politische Bildung. The first theme was European identity in a Canadian context and how both sides could learn from each other’s policies. The participants then returned to the ICD where they formed groups and worked on several case studies looking at Canadian-German economic relations. This was followed by a lecture by Niels Klabunde, a Junior Researcher at the Center of Excellence for Research on Immigration and Diversity who discussed comparative responses to migrant economies in both Canada and Germany. The day concluded with a brief presentation by alumni members of the Canada Meets Germany study tour which looks to expand its network, and discussed their experience on the CMG study tour.

Thursday March 11th, 2010: The day began with a meeting at the Auswärtiges Amt which looked at German-Canadian political relations from a German perspective and covered topics such as immigration, economics, education, and culture. The participants then made their way to the Deutsche Gesellschaft für Auswärtige Politik for a panel discussion. The discussion covered India and China’s rise in power, Canada and Germany’s role in Afghanistan, and both countries’ contributions to human security in contemporary political affairs. The panel discussion was then followed by a brief, but engaging question and answer session.

Friday March 12th, 2010: The final day of the CMG conference began at the Reichstag where participants were given a tour and then heard a lecture from Uli Finkenbusch discussing the public perceptions of the Afghan war from a German perspective. The participants then took part in a walking tour of Berlin where they reconvened at the ICD House to partake in an interactive presentation about art as Cultural Diplomacy from program director Sophie Roehrig. After the presentation, all participants received their certificates of attendance and had one last good bye.