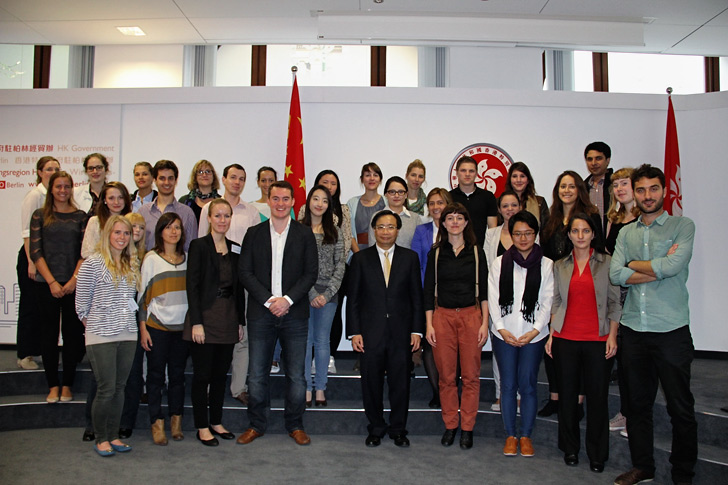 The ICD was delighted to welcome a diverse group of young leaders from three different continents to Berlin to discuss ways of deepening cultural relations between Europe and China.

Participants were officially greeted by Mark Donfried, Director and Founder of the ICD, who drew on his academic background to provide some theoretical context to the notion of cultural diplomacy. This was followed by a debate between Norma Wright, Head of the ICD Human Rights Program, and Geoffrey Walters, team leader of the ICD Initiative for Corporate Cultural Diplomacy, with the title: “This house believes that Chinese involvement in Africa causes more harm than good.” Norma framed Chinese resource-grabbing in oil-rich regions as neo-colonialism, whilst Geoffrey’s argument focussed mainly on the mutual political support that Chinese-African economic cooperation would engender in organisations such as the UN. After the debate, participants had a unique opportunity to meet a delegation of Burundian diplomats visiting Berlin, and to take part in an interactive discussion about Burundi’s relations with China and Europe. The diplomats noted that Burundi’s relations with Europe were more historical than their ties with China, ties which only began in earnest after China opened up to the rest of the world following the Cultural Revolution. As diplomats, they were unwilling to pin their colours to the mast and say whether the Chinese economic approach or the European democracy-orientated approach was superior. The panel discussion segued into a Burundian cultural evening at the ICD House of Arts and Culture, hosted by Anatole Bacanamwo, Burundi Ambassador to Berlin, which gave participants the chance to try some Burundian food, set against the musical delights of songs performed by renowned duo Carlo Parisel and Brigette Santos.

Participants spent Wednesday and Thursday travelling round Berlin visiting various sites of cultural interaction between Germany and China. Wednesday began with a trip to the Hong Kong Economic and Trade Office in Berlin, which doubles as an unofficial Hong Kong embassy due to the region’s special status as a politically autonomous area inside Chinese territory. The director, Ivan KB Lee, was an inspiring speaker, and many participants commented afterwards that this was their favourite part of the conference. The director started his presentation with a short introductory video about the Yeosu Expo, before presenting Hong Kong as “the gateway to China.”  Afterwards, participants visited the British Council’s office in Berlin, where Director John Whitehead used the British example to introduce them to the idea of state-sponsored Cultural Diplomacy. Mr Whitehead defined Cultural Diplomacy as the building of engagement and trust between people of different cultures through the exchange of knowledge and ideas. The British Council’s activities in China include promoting mutual understanding and trust; current cultural projects include working with eco-entrepreneurs, identifying future leaders and organising school exchange projects. For the next event, participants went to the Federal Office for Political Education (Bundeszentrale für politische Bildung), where political scientist Dr Marco Michel spoke about the challenges facing German cultural diplomacy in Europe. In the interactive discussion that followed his presentation, he noted in particular the difficulty of creating a common European Foreign Policy to ensure that Europe acts as a bloc in cultural and political negotiations with China. Formal proceedings for the day concluded with a tour of the East Side Gallery given by artist Günther Schaeffel, one of those involved with the first murals painted on the remnants of the Berlin Wall after the Mauerfall in 1989. It was a privilege for participants to be able to talk with someone who had been involved in such a direct way in cultural diplomacy - literally painting a favourable picture of newly united Germany to China and the rest of the world. This was followed by an international boat party on the River Spree, where the group relaxed in the company of Erasmus students and other expats living in Berlin.

Events on Thursday began with a presentation by David Zimmermann, Director of the German Academic Exchange Service’s (Deutscher Akademischer Austauschdienst) (DAAD) Berlin office. He presented the student exchanges organised by the DAAD in both Germany and China as an example of cultural interaction between the two countries. German students in China and Chinese students in Germany contribute to growing global academic mobility; they return from their travels both more employable than before and as lifetime agents of cultural exchange. Next, participants visited the Chinese Cultural Centre in Berlin, where they were warmly welcomed by the director, Mr Jia Jianxin, who kindly extended an open invitation to several Chinese cultural events in the coming days. His colleague, Polly, gave us a brief introduction to the centre’s cultural activities, which include exhibitions, performances, films and seminars, all with the view to dispelling common prejudices about the lack of openness of Chinese culture in Germany. The group then moved from working within a strictly cultural context to the field of corporate cultural diplomacy; Leon Macioszek, head of the Reconstruction Bank (Kreditanstalt für Wiederaufbau) (KfW), talked to participants about the role a promotional bank can play in bringing Europe and China together on a more economic platform. Founded using money from the Marshall Plan after the Second World War, KfW’s development work principally relates to creating sustainable energy partnerships between Germany and China. The day’s events concluded with an informal group dinner at the Sakura restaurant, where the group enjoyed some Asian food in the company of ICD Director Mark Donfried.

The conference schedule on Friday was a little less frenetic, with most of the events being based in the ICD itself. First of all, the group was fortunate enough to talk with H.E. Anatole Bacanamwo, Burundi Ambassador to Germany, who gave a diplomat’s perspective on the importance of good relations with China and Europe, particularly in the context of Europe acting more and more as a unified bloc in response to the current financial crisis. The ambassador commented on the ambiguous reception of China’s strategy in Africa: on the one hand, China is gaining political leverage through facilitating economic growth in Africa; on the other, African workers are increasingly seeing their jobs stolen by Chinese expats. Next, participants took part in a larger public event at the Bertelsmann Foundation, where they were able to watch a panel discussion entitled “Partner or Competitor? - China’s entry into the Green Economy.” The distinguished panellists included Professor Siwei Cheng, former Vice-Chair of the Chinese National People’s Congress, Professor Klaus Töpfer, former director of the UN Environment Program, and Stefan Riel, founder of a company for project planning in solar energy currently based in China. The main topic of discussion was the way in which China, destined to replace Germany as the world’s primary producer of solar energy in 2013, can draw on the experience of German companies to produce sustainable energy for its massive population. After this, the group returned to the ICD, where they were treated to an interactive discussion with former Bulgarian Foreign Minister Dr Solomon Passy. This was perhaps the event in which participants were the most actively involved, as Dr Passy asked representatives of different continents to talk about the triangular relationship between Europe, China, and participants’ individual countries. The conference was formally brought to a close by ICD Director Mark Donfried, who thanked participants for coming to Berlin and encouraged them to take the initiative to set up their own cultural projects relating to Europe and China.

"We need to learn more about China's contribution to humanity. There is a lot about China we do not know"
"If Europe is to be ready to for China's supremacy, it needs a common fiscal policy, a common defence policy and a common energy policy. We have to be ready to respond to China's rise" - The Hon. Dr. Solomon Isaac Passy- Former Foreign Minister of Bulgaria

“In the West, it's ‘environment and development’ whereas in the East it's ‘development and environment. In other words, the East and West have very different priorities.” - Prof. Klaus Töpfer- Federal Minister for the Environment and Nuclear Safety

“Any trade war with China must to be utilized in order to build positive bridges with China." - Stefan Riel, founder of the only German company for project planning in solar energy active in China

"China will only really catch up with the with the 'West' when it has the same levels of education among its population" - Prof. Siwei Cheng, Chairman of the International Finance Forum in Beijing, member of the National People's Congress and former advisor to the World Bank

"...cooperation is the main result of the establishment of cultural centers..."- Polly, the Chinese Cultural Centre Berlin

"There is a fight to attract the best students."
"We are looking for lifelong partners for future cooperation." - Daniel Zimmermann, DAAD, Director of Berlin office

“I am fascinated by the cultural aspects of China and Europe, as well the business, political and economic aspect of international relations.” - James Sterla. UK

“A large focus nowadays is on business cooperation, I think that cultural cooperation is important in the long term.” - Anja Bollrup-Jensen. Denmark

“This forum will help us connect to other people with similar ambitions, the chance to network and build contacts, as well as gain invaluable and practical knowledge.”- Alexandra Guzman. Peru

“Having spent a lot of time studying EU trade, with China playing an ever more influential role as one of Europe’s biggest trading partners, I'm interested in finding out more about the cultural exchange of the relationship.” - Lucy Tallentire. UK

“When I heard about this concept of cultural diplomacy, I wasn't sure exactly what it was, and so I wanted to come and explore this exciting opportunity.” - Anna Yates, Germany. UK

“Since I'm planning to work in a field concerning the future of the German-Chinese relationship, I'm very interested in cultural diplomacy and the growing role it can play. It's been very insightful to build a foundation of understanding here with the ICD.” - Julia Breuer. Germany