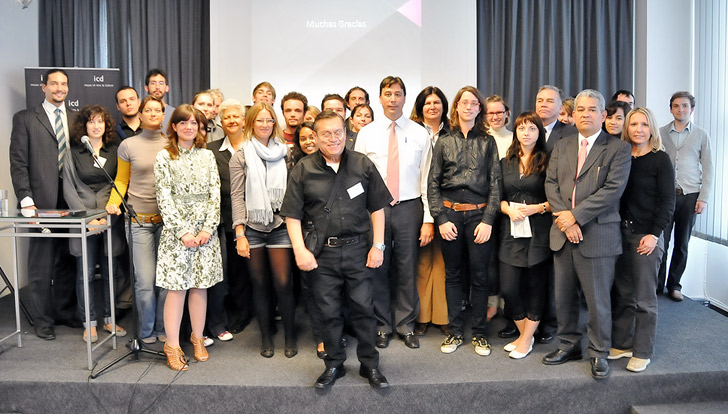 Europe meets Latin America- A Forum for young leaders started on Sunday, September 12th and was a week-long event during which European–Latin relations were investigated and talked about by trying to look upon the topic from various angles and perspectives. Among the speakers were an active politician, the Deputy Minister of Foreign Affairs of Panama, his Excellency Melitón Alejandro Arrocha, the Director of the LAKINO Berlin Film Festival 2010, Martin Capatinta, the Director of Médicins sans Frontiers, Dr. Frank Dörner and Reginaldo Vincentim, the director of COARGROSOL, to name a few. The topics of the lectures varied from economical support, credits and fair trade, to literature, and to medical aid provided by NGO’s.

Sunday, September 12th 2010: The Europe meets Latin America – Forum for young leaders began in the afternoon after registering with a lecture introducing the topic of Cultural Diplomacy by Mark Donfried. After a short break for coffee and refreshments the participants went to get to know the historic parts of Berlin and in the evening got to know each other over a group dinner at the restaurant ‘En Passant’.

Monday, September 13th 2010: The second day of the forum began with a lecture by Dr. Dörner, the Director of Médicins sans Frontiers, followed by another lecture seminar by Mark Donfried. After lunch the group listened to a lecture about ‘Transparency and Entrepreneurship in Latin America’ by Prof. Herrera Moro. The last lecture of the day was given by Prof. Dr. Nitsch on the topic of ‘A European look at the Latin American economies’. The day concluded with a group dinner followed by watching the movie ‘El Regalo’ at Babylon Cinema, as part of the Latin American Short Film Festival in association with the Instituto Cervantes.

Tuesday, September 14th 2010: The third day started with a lecture given at the Bundeszentrale für politische Bildung on ‘The European Idea’, after which the group returned to the ICD House for a lecture by Cardiff University Professor Prout on ‘The role of medicine and Latin American stereotypes’. Next the deputy Minister of Foreign Affairs of Panama then gave a keynote speech on ‘Panama’s vision on European-Central American relations’. Later in the afternoon participants presented their own papers and in the evening the director of the LAKINO Film festival presented a series of short films followed by a discussion.

Wednesday, September 15th 2010: The participants began with a UN-Model Panel discussion before visiting the Danish Embassy for a European perspective on inter-regional relations. Upon returning to the ICD House, Carolina Galindo Hernandez gave a speech concerning the quality of democracy in Colombia and Peru. In the evening, the participants enjoyed a Salsa party at ‘Havanna Club’.

Thursday, September 16th 2010: Michaela Balke from Oikocredit presented an engaging account of providing access to microcredit and Fair Trade in Latin America, followed by a presentation from Reginaldo Vincentem the director of COAGROSOL, a successful example of Fari Trade in Brazil. After the lunch break the participants went to visit the facilities of Deutsche Welle and learnt of its activities from the TV presenter Héctor Medellín. In the evening they saw the remnants of the Berlin wall at Bernauerstraße and had a group dinner afterwards.

Friday, September 17th 2010: The final day of EMLA began with a lecture from Prof. Dr. Ingenschay from Humboldt University on ‘Politics and Cultural Diplomacy in Latin American Literature’. In the afternoon the first lecture was concerned with the issue of humanitarian aid in Haiti, presented by two representatives from Welthungerhilfe (World Hunger Help). The final event in the ICD House was the presentation of participant leadership initiatives with Mark Donfried before heading the German Parliament for their final lecture.