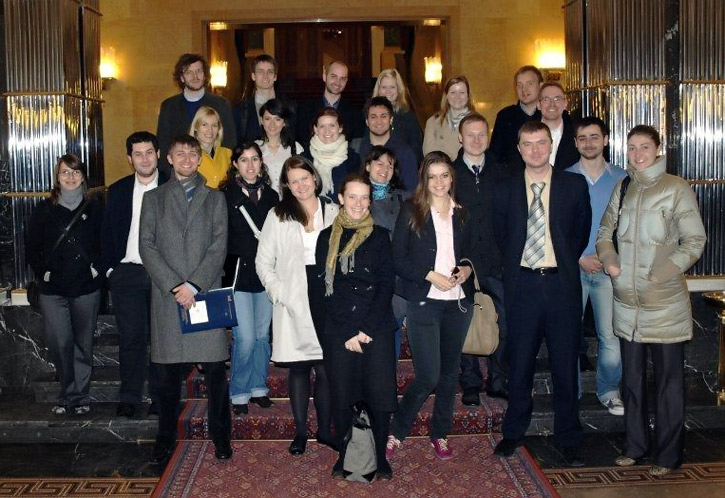 The weeklong conference for “Europe Meets Russia: a forum for Young Leaders” took place in Berlin from 11th April to 16th April 2010. The program focused on the following topics: contemporary topics in the EU-Russian relationship, the economic and political ties between Russia and the European Nations, European political bodies and the role of arts and media, breaking down cultural barriers, Russia’s European neighbours and future integration. Additional insights were given into the field of cultural diplomacy. Also leadership initiatives for young leaders were explored. The forum speakers included leading figures with a particular interest in Russo-European political and economic relations. The participants were awarded an official certificate of attendance at the end of the program, which confirmed attendance and provided details of the speakers who took part during the week and the topics discussed.

This was followed by a speech from Dr. Petra Opitz, an economist and expert on energy sector policy. She gave a lecture on the importance of gas lines across Europe and Russia. Her speech provided insight into how Russia would like to export electricity to the European Union. She highlighted the importance of a real framework for investment in energy efficiency.

The final lecture of the day was given by Peter Rees, about sports as cultural diplomacy in European-Russian relations. The participants were able to learn about historical examples of how sports have built cultural bridges between different countries and how sport can be used to unite international audiences.

Tuesday April 13th, 2010: The Europe Meets Russia Forum began its day at the European Commission where the participants heard a speech by Professor of European Studies Dr. Ulrich Brückner on contemporary economic and political relations between Europe and Russia.  During the question and answer session, participants were able to gain a deeper understanding of the relationship between Europe and Russia, as well as a more concentrated comprehension of the current issues facing Europe and Russia such as multilateralism and strengthening economic ties.

At the Norwegian Embassy, the participants learned about Nordic strategies in building ties with Russia in a presentation by embassy representative Øyvind Søtvik Rekstad.  Through the speech, the EMR participants gathered a deeper understanding of international relations between Europe’s most northern states.

Larissa Fontak kindly opened the doors of her collection to the ICD “Europe Meets Russia” seminar. Surrounded by paintings of her latest exhibition focused on female representation, she illustratively introduced the participants to the latest art trends and displayed her desire to improve the relations and understanding of Russian culture in Germany.

For the final lecture of the day, journalist Robin Lautenbach was scheduled to give a speech on the role of the media on European-Russian relations, but due to the recent tragic demise of the Polish president, he spoke with the participants on contemporary German-Polish relations. As a German living in Poland for the past fifteen years, Mr. Lautenbach’s poignant speech discussed the changing face of German perception of Poles and the diplomatic reaction to the death of Lech Kaczynski.

Thursday April 15th, 2010: For the morning session, EMR participants presented their take on leadership initiatives that had been introduced earlier in the week. They worked in small groups to network and discuss ideas, while creating presentations on the initiatives they developed over the week.

The conference then turned to the day’s theme of ‘Breaking Down Cultural Barriers,’ starting with an interactive workshop on eliminating previously held stereotypes, hosted by Dr. Ivanova. The participants were given the opportunity to discuss commonly held beliefs and stereotypes about other cultures as well as their own.

In the evening Dr. Sergei Nikitin hosted an interactive discussion on expanding businesses to Russia. The speech was given in Russian, along with an English translation. The speech discussed the enthusiasm of Russian businesses to invest in Germany, providing a valuable perspective to participants interested in the business sector of international relations.

Friday April 16th, 2010: The last day of the conference looked at Russia’s European neighbours and its possibilities of future integration. This began with Dr. Guz-Vetter delivering a speech on the EU neighbourhood policy and its future direction. The speech echoed a main theme of the conference, which is how to integrate the neighbouring states of the European Union, including Russia’s future as a neighbour of the European Union. The participants weighed in their feelings about Russia becoming more incorporated in European policy making.

For the final event of the forum, the participants visited the German Foreign Office to explore its role in Foreign Affairs and in the German-Russian relationship.  It was an informative and relevant conclusion to this exciting conference.