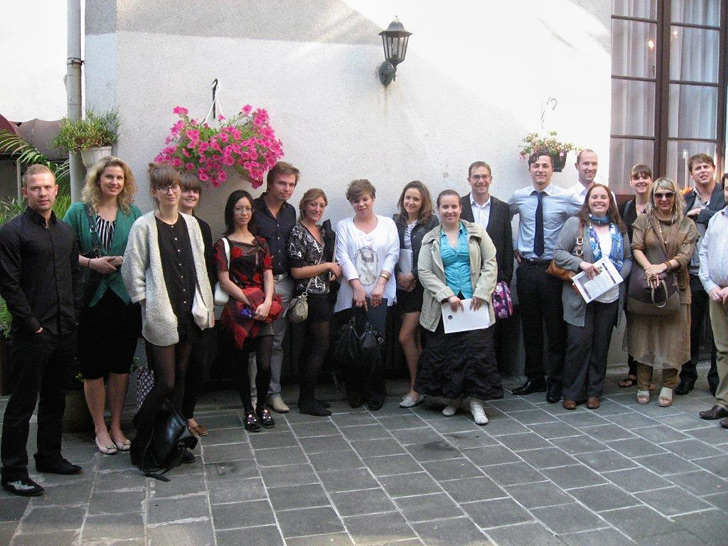 The ICD would like to extend its sincere gratitude to all those in the organisation of the conference and to the entire Cultural Diplomacy in Europe team including; William Hernád, Ines de Belsunce, Gustavs Gudzuks, Lucie Hladikova.

Special thanks go to the team leader, William Hernád, for all of his hard work, inspiration and dedication to the success of the conference.

Finally, the ICD and all of the organisers would like to thank the participants and speakers, whose enthusiasm and participation were a vital contribution to this international event. The ICD would also like to thank especially the Centre Culturel et Scientifique auprès de l'Ambassade de Russie and its Director, Mr. Valery Rounov.

The ICD was delighted to welcome a diverse group of young leaders from three different continents to Berlin to discuss ways of deepening cultural relations between Europe and China.

Tuesday 7th August
Participants were welcomed to with a reception and brief introduction to the program. Speakers included Professor Dr. Fabrice Serodes of the International Relations Institute des Etudés de Paris and Mr. William Hernád, Program Director of the Institute for Cultural Diplomacy. Dr. Serodes gave an introduction titled “Introduction to Cultural Diplomacy and the Cultural Dialogue Between Russia and the European Union in 2012,” which took place at the Centre Culturel et Scientifique auprès de l'Ambassade de Russie. The afternoon included a visit to the Embassy of Latvia, where Mr. Aldis Karlauskis, Counselor of the Permanent Representation of Latvia to the EU, gave a lecture titled “EU-Russia Dialogue from Latvia’s Perspective.” Ms. Maria Karaglannidou, Specialist on Energy, followed with a talk titled, “Decision Making Process in the EU with regards to the Energy Policy and the Institutional FrameworkNegotiations of the EU Russian New Agreement and Southern Corridor Negotiations.” Participants were then taken on a walking tour of Brussels, learning about the history of the city, and then were able to take part in a welcome dinner.

Wednesday 8th August
Day two began with a trip to the Belgian Foreign Ministry, where Dr. Jean-Arthur Réglbeau, Political Director of General Multilateral Affairs and Globalization, lectured on the role of cultural diplomacy in Belgian foreign policy. In the afternoon, Mr. Alexander Gusarov, First Secretary of the Permanent Mission of the Russian Federation to the EU, gave a lecture titled “Opportunities and Challenges Facing the European-Russian Relationship” at the Permanent Mission of the Russian Federation to the EU. Subsequently, participants travelled to the European Commission, where Dr. Alexander Mattelaer, the Assistant Director of the Institute for European Studies at the University of Brussels, gave a lecture on European-Russian relations in terms of defense and strategy. In the evening, participants were able to partake in a visit to the Parlamentarium.

Thursday 9th August
Role of Energy in the Russian-European RelationshipA Presentation of European Energy Charter.” Following, Mr. Maarten Horeman gave a lecture on the presentation of the Art Center for Russian Studies of the University of Leuven. At the Centre Culturel et Scientifique auprès de l'Ambassade de Russie, Ms. Yelena Kharitonova, the Director of Caravan Cultura, gave a lecture titled “More Procreative Europe in Eurasia and the Other Way Around: Projects of Caravan Cultura for Young Designers,” discussing artistic influences on European-Russian relations. Mr. Valery Rounov, the Director of the Center for Russian Culture in Brussels, followed with a lecture on perspectives on cultural diplomacy and European-Russian relations. The day concluded with a lecture from Ms. Regina Kramer, addressing inter-regional cultural diplomacy in the European-Russian context.

Friday 10th August
Mr. Willem Noë, Senior Expert on Directorate General Enlargement, began the final day with a lecture on EU enlargement and the logic of EU integration at the European Commission. Mr. William Hernád then led the conclusion session of the program, which was followed by a farewell lunch for participants before an official historical tour of the Federal Belgian Parliament.

“There are four key issues - the Economy, Freedom and Security, the Education, the Energy.”
- Aldis Karlauskis, Director of the Energy Institute of the National Development and Reform Commission of the People’s Republic of China

“The most difficult relation with the EU is Russia, a neighbour that we cannot change.”
- Dr. Jean-Arthur Régibeau, Public Director-General Multilateral Affairs and Globalization, Belgian Foreign Office

“Russians do not have the same game rules as the EU’s”
- Dr. Jean-Arthur Régibeau

“The EU does not have a common cultural identity: the EU has not a common voice”
- Alexander Gusarov, First Secretary, Permanent Mission of the Russian Federation to the EU

Full interviews can be found online in both written and video form.