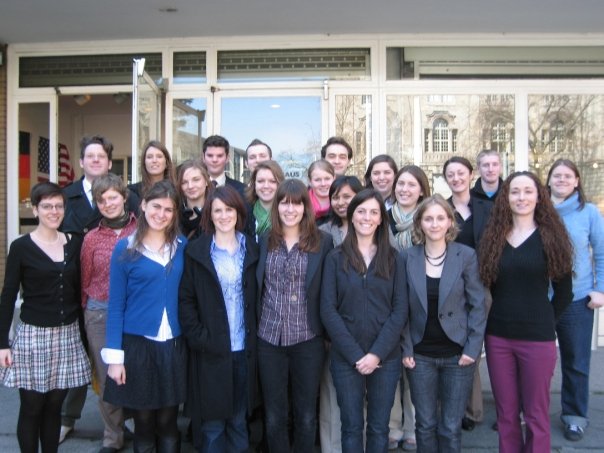 Report of Day 1: An Introduction to Cultural Diplomacy

On the first day of the second Weeklong Seminar for The USA Meets Germany: A Forum for Young Leaders, the participants gathered in the Amerika Haus and presented themselves, and their work/studies to the group. The participants were then given an introduction to cultural diplomacy from ICD Director and Founder Mark Donfried, who gave a brief overview and explanation of the key terms and definitions within the field.

In the afternoon the young leaders took part in a lively workshop organised and run by ICD staff member, which focussed on ‘Nation Branding’ in the German-American relationship.  The participants were divided into four groups to discuss issues such as stereotypes, identity and globalisation. One member of each group then presented their views and findings to the rest of the participants. Stereotypes proved to be a very interesting topic and a discussion of whether there is any truth within them ensued.

Following a short coffee break the young leaders spent the afternoon listening to Dr. Christian Tuschhoff, a visiting Professor at the Freie Universität in Berlin, whose lecture, Still lost in Translation?, gave a brief historical overview of the relationship between the USA and Germany and an insight into the future ahead. His discussion of the opportunities and challenges of transatlantic relationships made sure that the young leaders had plenty of questions for Dr Tuschoff during the question and answer session after his lecture.

In the evening the group enjoyed international cuisine at En Passant, located in the heart of Berlin’s restaurant district.

Day 2: Transatlantic Cultural Diplomacy in Action and the Role of New Media

On the second day, the USAMG group discussed the decline of state-sponsored cultural diplomacy since the end of the Cold War. During the workshop they focussed on a case study by Cynthia Schneider called Culture Communicates: US Diplomacy that Works. The participants took part in a lively discussion that ranged from the idea of arts, literature, and music as a form of cultural diplomacy to the impression of the USA given to the rest of the world from Hollywood.

After lunch, the group travelled to Humboldt University for a lecture by Dr. Reinhard Insensee who discussed the current transatlantic program between the Humboldt University and Georgetown University, Washington DC.  Dr Insensee explained the three main projects that have been designed to build strong transatlantic relations between students. These projects included the Annual Student and Graduate Conference, the International Summer School and the Transatlantic Student Symposia.

On their return to the Amerika Haus the participants took part in a seminar with Jorg Wolf, Editor-in-Chief at the Atlantische Initiative, and discussed the role of new media in strengthening transatlantic relations. The internet was discussed as a platform for cultural diplomacy and a lively question and answer session followed the presentation.

In the evening, the group enjoyed traditional German cuisine and local entertainment at the Wirtshaus Hasenheide.

Day 3: Presenting Images of a Culture and Balancing an Economic and Cultural Relationship.

The following morning the young leaders converged in the Amerika Haus for a seminar with Pam DeVolder, Deputy Cultural Attaché at the US Embassy in Berlin.  Ms. DeVolder gave an overview of the embassys structure and functions and highlighted many of the cultural exchange initiatives that it is responsible for.  The notion of presenting a nations cultural image overseas was discussed and the historical importance of the US Embassy in Berlin and its function post WW2, and in particular during the Cold War years, was also explored.

The afternoon session began with a group discussion of Germanys presence in the USA.  The young leaders were posed the question Is German culture effectively presented in the USA?  A lively debate ensued framed around a discussion of various eminent German cultural organisations such as the Goethe Institute.  The 20 young leaders were divided into small groups where they could focus on one of these institutions. There were many interesting suggestions for how these German institutions could present modern Germany to the USA and the wider world.

Following the group discussions, there was a fascinating lecture by Carl Graf von Hohenthal from the American Chamber of Commerce.  The lecture focussed upon the issue of balancing a cultural and economic friendship.  Mr Graf von Hohenthal spoke of his personal affection for America having lived in West Germany during the period of the Cold War.  The former editor of Die Welt and economic specialist then outlined the key dimensions of the German-American relationship.  He concluded that modern federal Germany was in some ways the child of America given the huge US support for post-war Germany. The young leaders then had the opportunity to ask questions.

After a lengthy discussion the participants were took  a trip to Route 66 an American cuisine restaurant followed by a night of drinks and conversation with an international crowd aboard the Eastern Comfort Boat language party.

Thursday’s activities began at the Deutsche Guggenheim gallery.  The art exhibition ‘Picturing America: Photorealism in the 1970s’ provided a snapshot of American life, culture and society as it was in the 70s.  The artworks generated a great deal of debate, critique and cultural exchange.

After a break for lunch the participants returned to Amerika Haus where they then assembled in small groups to closely scrutinise several works by a selected artist.  Sophisticated interpretations of the artworks followed and then a member of each group stood-up and presented their group’s findings.  The effectiveness of using art as a tool for cultural diplomacy was then discussed at length.

Following this the group journeyed to Potsdamer Platz for a seminar with Jörn Holtmeier from Daimler AG.  This talk focussed upon the role of the private sector in fostering trans-Atlantic relations and took place in the historic Haus Huth which is the only building in the area to have survived both the war and the wall.  The discussions centred upon Daimler’s traditionally strong ties to the US and the companies presence within the US and global automotive industry.

Afterwards, the group enjoyed a private tour of Daimler’s current art exhibition.  This involved many interesting clothes and photographs from South Africa as part of a competition Daimler had sponsored for young South African designers.

The evening’s activities took place back in the Amerika Haus, where speakers Pastor Frank Williams (The Protestant Faith Fellowship), Michael Kuenzel (City West Berlin) and Werner Hoyer (FDP Party) spoke about the importance of the Amerika Haus to Berlin’s future. The presentations were followed by live music and drinks that kept the audience entertained long into the night.

Day 5: German Politics - The Bundestag and the Reichstag

On the final day, the young leaders took part in an informative and interesting question and answer session with Dr. Werner Hoyer,  a member of German Parliament for the FDP for over twenty years. The participants had the opportunity to ask any questions regarding transatlantic relationships after January 20th, 2009 in the European context and the discussion covered issues such as defence, Guantanamo Bay and American politics.

Following the talk, the group had the opportunity to visit the Reichstag with Dr Hoyer via an underground tunnel from the Bundestag which offered an insight into the workings of the Bundestag.

Before the final farewell, ICD founder Mark Donfried talked to the group about being a cultural diplomat in your own community and how young leaders could launch their own leadership initiatives. He also discussed some past initiatives from young leaders and gave the participants an opportunity to brainstorm with the group about what steps they could take to promote cultural diplomacy following the forum.