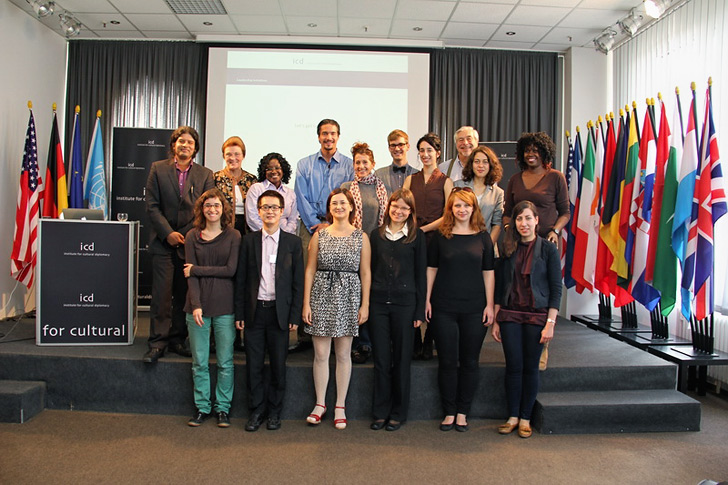 The ICD was delighted to welcome a diverse group of young leaders from different countries to Berlin to discuss ways of deepening cultural relations between Italy and Germany.

The participants of the Italy Meets Germany conference were officially welcomed by the Prof. Dr. Ulrich Brueckner, (Jean Monnet Professor of European Studies, Stanford University, Member of the Board of Directors, ICD) whose presentation’s name was “Italian - German Political Relations: A German and European Point of View”. The starting point of his presentation could be found in the conception and exchange of cultural identities of Italy and Germany over time and the shared heritage between the two countries. Italy and Germany belong in fact to one cultural space or political entity: The Holy Roman Empire. Apart from the historical background there has always been a story of migration between the two countries. Italy represented for Germans the main destination to discover the shared roots of European identity. A trip to Italy was reminiscence of the fact that we all “belong to something bigger”. After the First World War a new understanding of cultural identity developed in Germany and Italy. After the Second World War there has been a comeback to the idea of “Community Europe” and people have focused on new concepts such as interdependence and multiculturalism. Nowadays the key idea of Europe is “United in Diversity” and “We are all designers and architects of this new shared place”. Currently, there are strong cultural exchanges between Germany and Italy which can be seen in the investment of the German Foreign Office in culture in Italy.

The second lecture of the first day was held by Marc Bogaerts, Choreographer & Artistic Director; ICD Head of Cultural Diplomacy in Practice program. The participants were confronted with the dangers of perception of the others and the stereotypes that we have of each other. Facing a series of theatrical body games, the participants had the opportunity to learn the many similarities between theatre and diplomacy. The actors always play a role. It is important to look beyond the stereotypes and appearances in order to have a genuine and fair exchange.

The participants visited the Italian embassy with a professional guide who explained to them the historical background of the building. The Italian embassy is in fact a witness of German and Italian common fascist history but also of their modern relationship. The first day of the conference was closed by the speech delivered by the Italian foreign correspondent Andrea D’ Addio, who talked about the “Italianization” of Berlin. This phenomenon can be divided into two migration waves. One in the 60s and 70s mainly consisting of unskilled factory workers (Gästarbeiter) assisting the German reconstruction and, recently, a wave of college graduate Italians. Even though living abroad, Italians don’t cut their Italians roots albeit living abroad. Although integration is difficult most Italian immigrants do not wish to return home because Berlin still stands for the “City of Hope” and meritocracy.

The second day of the conference was opened by the speech of the Ambassador Karl-Erik Norrmann, Secretary-General - European Cultural Parliament, who explained the relations between Italy and Germany as a “love affair”. There are many historical, political, economic and personal parallels linking the two countries. From another point of view, concerning the European Union the French-German couple is predominant. However, these parallels between Italy and Germany are not to be forgotten, particularly in the context of the north-south division within the actual crisis in the EU. Apart from the political and economical context, we should bear in mind the most important part of German-Italian cultural relations: Football!

The Italian journalist Valerio Bassan started his presentation by explaining that in Italy, the world of the press is facing a crisis in the field of Journalism. That is why he pursued his professional path in Berlin, until the creation of the online newspaper for Italian native speakers “Il Mitte”. This online magazine is a brave experiment which started four months ago when it went online. Since then it has been a great success reaching an even higher number of followers than hoped. The idea of the online newspaper is to bridge the language barrier for the Italian community in order to be informed about recent news in Berlin and the rest of Germany.

Participants gained another artistic perspective, thanks to Emanuele Lami. The participants had the opportunity to experience a new kind of presentation. He showed his video project, Uno Fra Tanti - Einer Unter Vielen“ www.vimeo.com/33020636, which presented his touching personal comparison with other Italian immigrants in Berlin. The artist wanted to understand his position in the society of Berlin by looking at the life of other Italian migrants. The feeling of loneliness extracted from the video is a common experience in Berlin, most notably of young individuals.

Following the same path, the famous Italian actress Elettra De Salvo shared with the participants of the conference her professionalism and experience of stage performances and theatre direction. She focused her presentation on the migration of the Italians in Germany and especially on what was called the “Spaghettisierung”.  Under this definition we could find the cultural, business and social interaction that the two countries have always had. As an expert in the field of art, she also explained that the development of a new artistic dynamic is capable of bridging the gap between structure and people. Italians come to Berlin because the city is “Poor but Sexy”, but they sometimes end up feeling lonely.

The second day of the conference was closed by the historian, journalist and president of the Italo-German “Malaparte” Association, who as an half German and half Italian, described the differences and varied perceptions of the two nations with regards to each other. Italy and Germany had an ambivalent and conflicting relationship starting with the fall of the Roman Empire until the recent defeat of the German Football National Team against Italy. Through his accurate and anecdotal historical overview he tried to describe Italian and German prejudices, with the main purpose of defining their historical inaccuracy and getting over them.

In the morning participants were officially greeted by Mark Donfried, Director and Founder of the ICD, who drew on his academic background to provide some theoretical context. Mr. Donfried gave various examples of how institutions and organizations work all over the world in order to build cultural bridges between different countries. After the first lecture participants were taken to the German Parliament where they were given a guided tour of the building and learned something of its incredible history.

Next, the participants were given a tour of the East Side Gallery, the longest outdoor art gallery in the world, running along the remnants of the Berlin Wall. The guide, Mr. Gunther Schaeffer, was one of the first artists who painted the wall. This was followed by an international boat party on the River Spree, where the group relaxed in the company of Erasmus students and other expats living in Berlin.

The first lecture of the day was given by Prof. Francesco Ferrante, professor of Macro-Economics at Cassino University, Italy. Examining the current state of the labour market in Europe, he showed that graduates in Europe often encounter a mismatch between their career expectations and their actual career. One possible solution might be the integration of the European labour market and the standardisation of regulations and education; this would increase graduate mobility and balance out supply and demand across the countries.

The second lecture was held by Matteo Mazzoleni, who shared his experience of work in an Italian-German business. According to the data he presented, Germany is Italy’s most important trade partner, but Italy only comes in at fifth place on Germany’s list of countries it does business with. German companies are often more efficient than Italian ones, because they are better structured and goal-oriented. Mr. Mazzoleni suggested that Italy should allocate their resources more effectively in order to match Germany’s results.

Participants visited Palazzo Italia to take part in a press conference for the Berlitalia Festival, held by Fabio Grasso, an Italian consultant and event manager. Mr. Grosso’s role is to act as a mediator between German and Italian companies to help them to create partnerships. Sometimes, German and Italian business relations seem to suffer due to a lack of cultural understanding between the various actors. Fabio Grasso helps them to better understand each other’s manners of working.

Berlitalia is a cultural festival which will take place on the 22nd and 23rd of September in Fuggerstraße, Berlin. This is a great example of the promotion of Italian culture and the connections that Italians build abroad. The conference finished with a farewell party at Italian bar Aspettando Filippo.